Yoga in Bali operates on a whole new dimension. Practicing twice a day is common, I’m used to twice a week! Yoga studios are everywhere varying from deeply traditional to refreshingly modern. They operate as community gathering places rather than workout hubs – comfy seating areas, wifi, tea, healthy food, and events. It is not uncommon for a class to cost almost the same as a (cheap) night’s lodging ($13). Worth it, though.

I fell in love with the yoga community cafes here. What an inspiring way to start the day, outdoor yoga followed by a Pink Dragon smoothie with fellow yogis and a cooling dip in the ocean. While techno, reggae and soft rock music at varying decibels are standard at the beach locations, the yoga cafes are quieter and feel more spiritual.

The yoga tour began with a live music flow class at The Practice in Changgu, Bali. This trendy and popular yoga studio has an captivating conical bamboo cathedral ceiling. All I wanted to do was lie on the yoga mat and dream in swirls. Our 2 hr(!) evening outdoor practice with 40+ yogis and a very well-trained instructor was in sync with a live guitar performance. 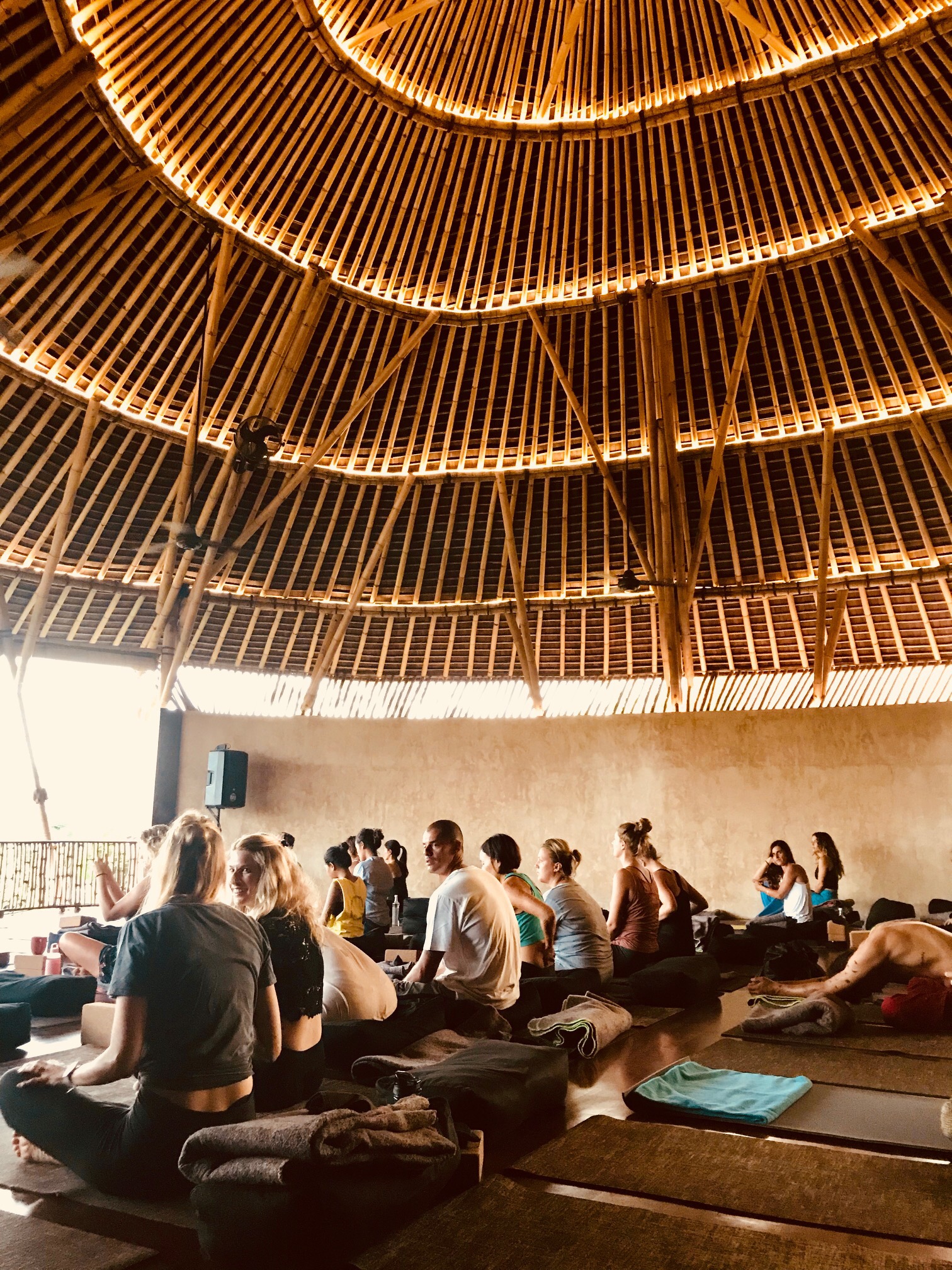 Moving north to Ubud, I joined a Hatha Flow class at Intuitive Flow in Penestanan set in the trees high above the downtown. I felt like I could fly off with the chirping birds (for a minute anyway!). Nadine, a new yogi / vegan friend and I enjoyed an apres-yoga breakfast of creamy smoothie bowls. A new menu item for me – fresh fresh fruit, yogurt, granola and chia seeds. Simple but delicious and visually appealing too. I fast became a regular at Intuitive Flow and Yellow Flower Cafe. 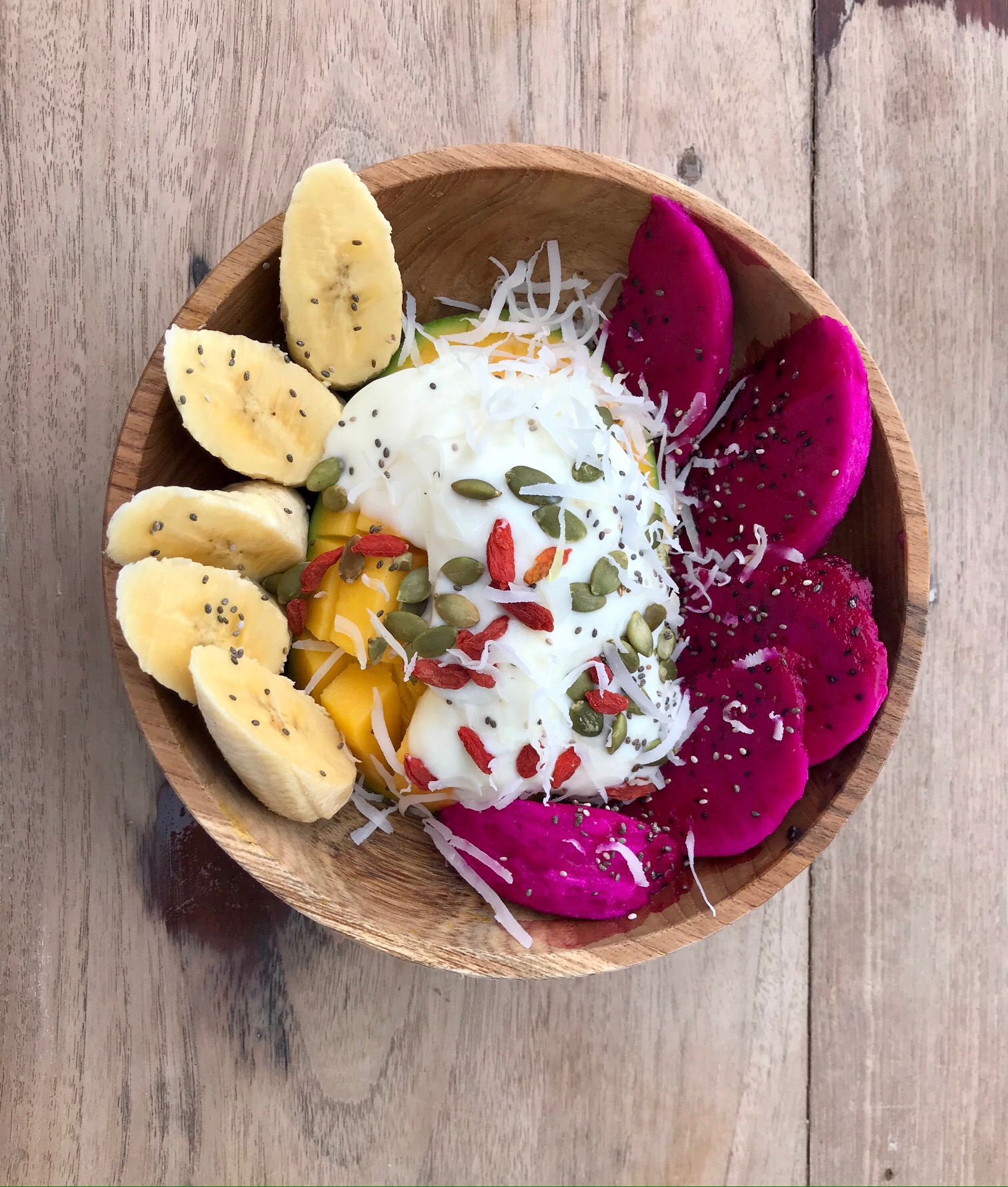 Next I was drawn to two yoga studios in Lembongan, the Yoga Shack and Ginger & Jamu. Lisa’s Hatha class at the Yoga Shack challenged every stomach muscle in my body. She also teaches Aerial Yoga, the practice studio is the beach! 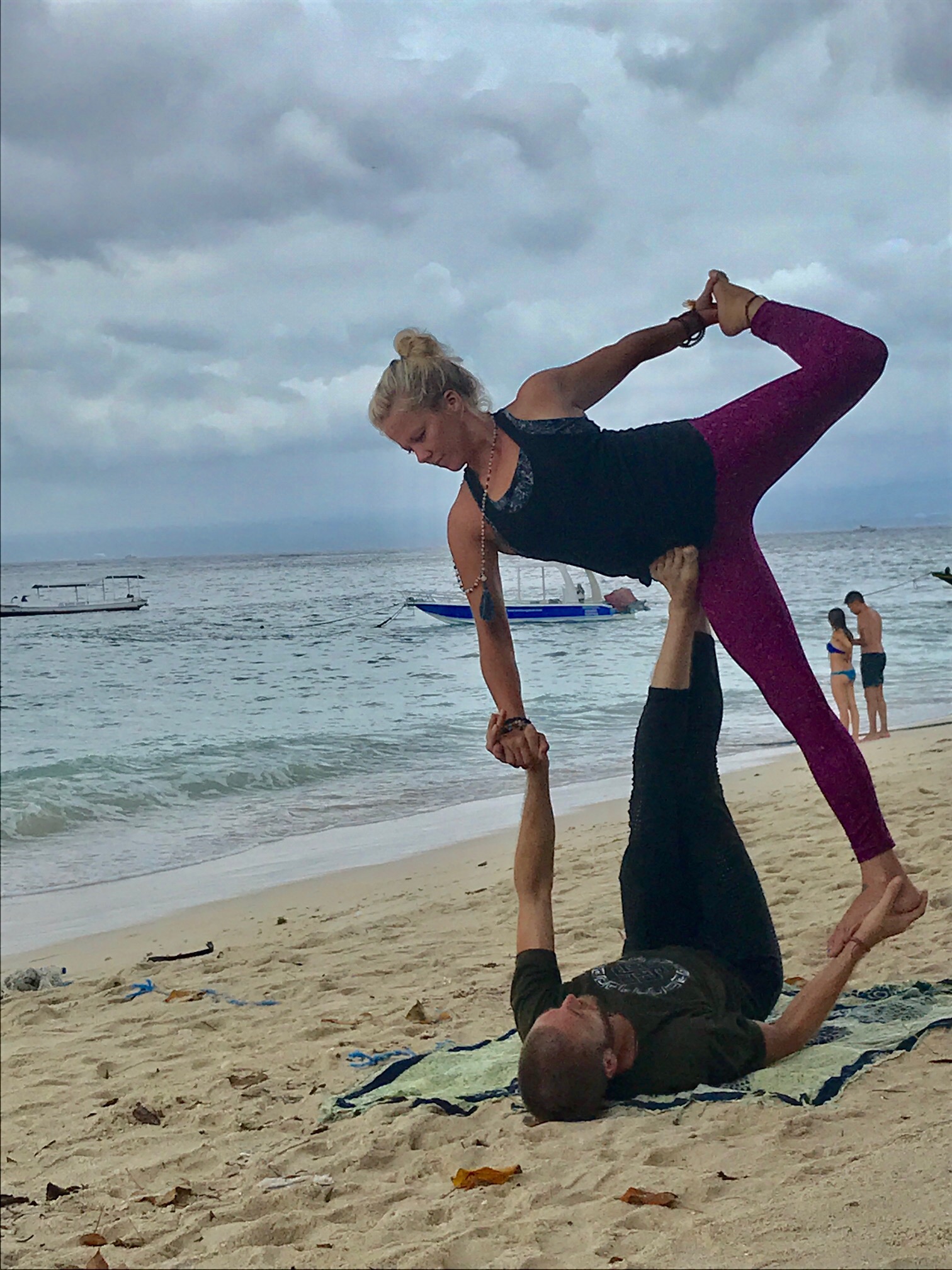 My favorite cafe in Lembongan was Ginger & Jamu. Frequenting it twice a day, I managed to drag myself away from the food for a sunset Yin class. This studio is on the beach, so the distraction was welcomed; the setting sun and salty smell of tide going out. Beautiful and inspiring. The juices and smoothies had some unusual ingredients ranging from spinach to chocolate. A whole new world of smoothies and vegan food has opened up for me. 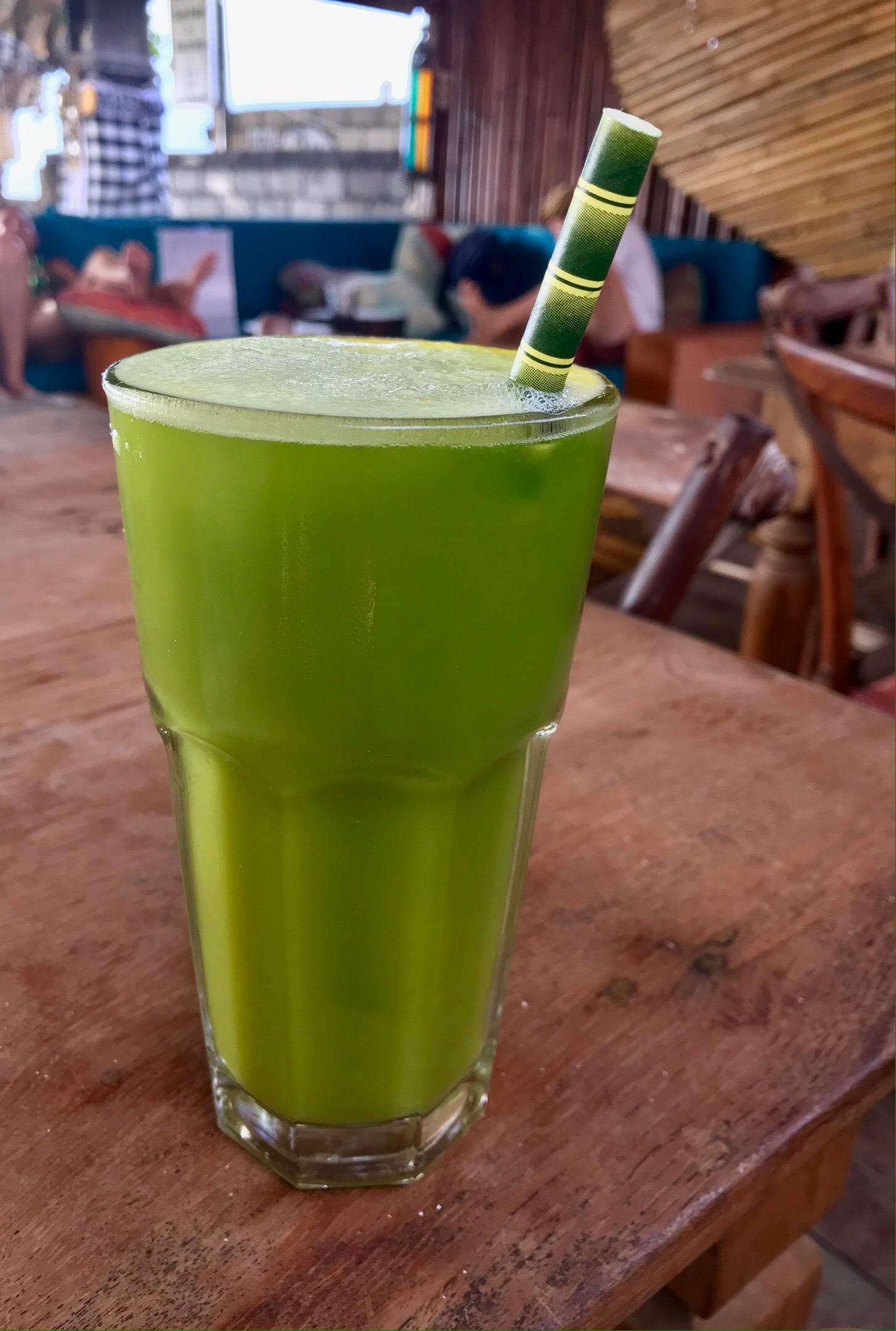 H2O yoga cafe on Gili Air was a welcome relief and calm from a few nights of beach music and some Bali Belly. It almost felt like being in a cocoon away from the magic mushroom beach scene.

Kelly, a jazz singer and yoga therapist, teaches an Aqua Yoga class at H2O. Well, that was a giggle. Balancing on one foot in a pool is humbling, it must have been the water knocking me over! She focused on the meditative aspect of yoga – controlling ones thoughts and all that – much harder than any hip stretch. I guess I have work to do there, maybe a good reason to stay in Indonesia. 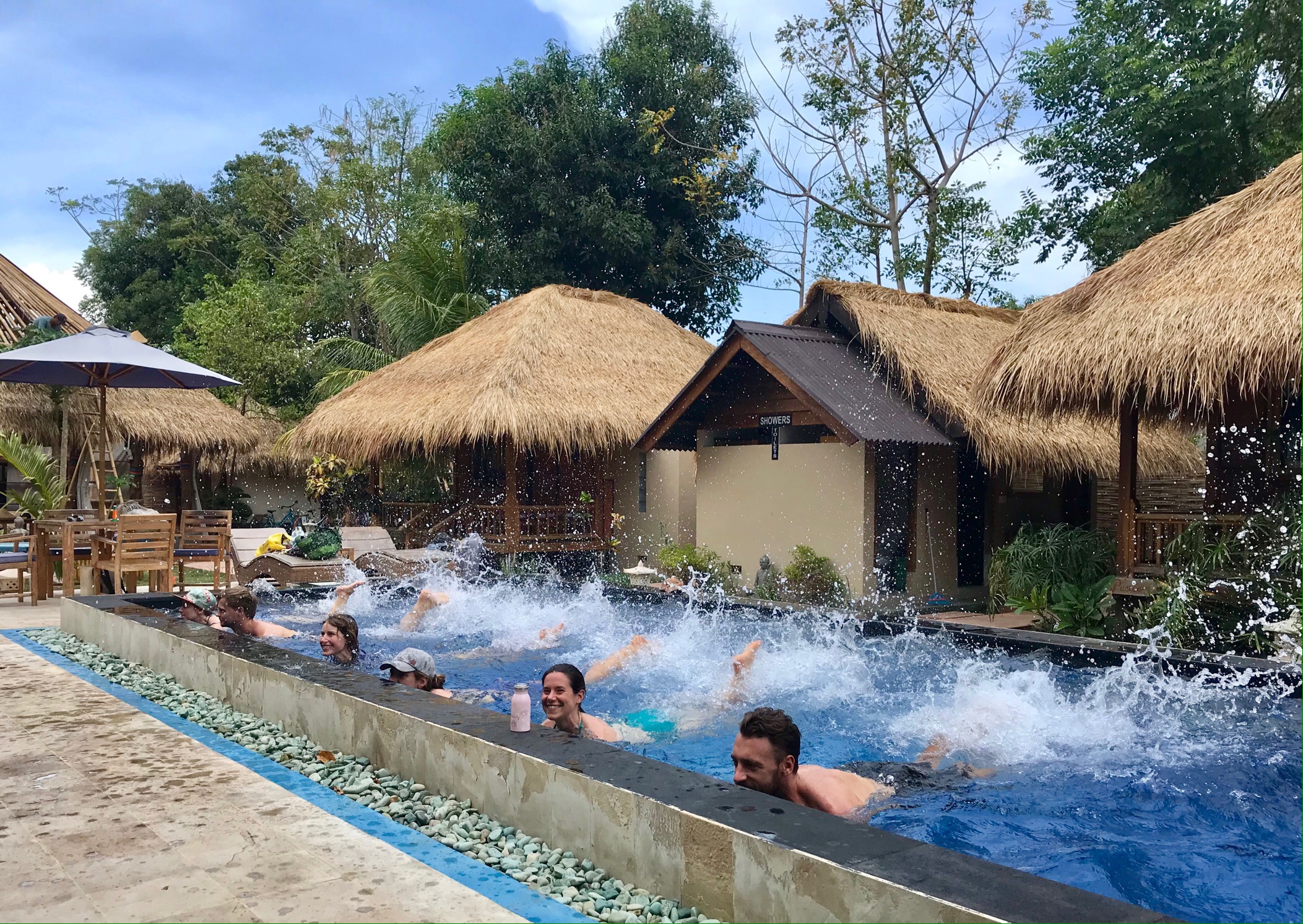 The Good Earth Cafe is adjacent and integrated into H2O. I tried several meals here, the best being a Pink Dragon smoothie (pineapple and dragon fruit) with an ample serving of made to order hummus. 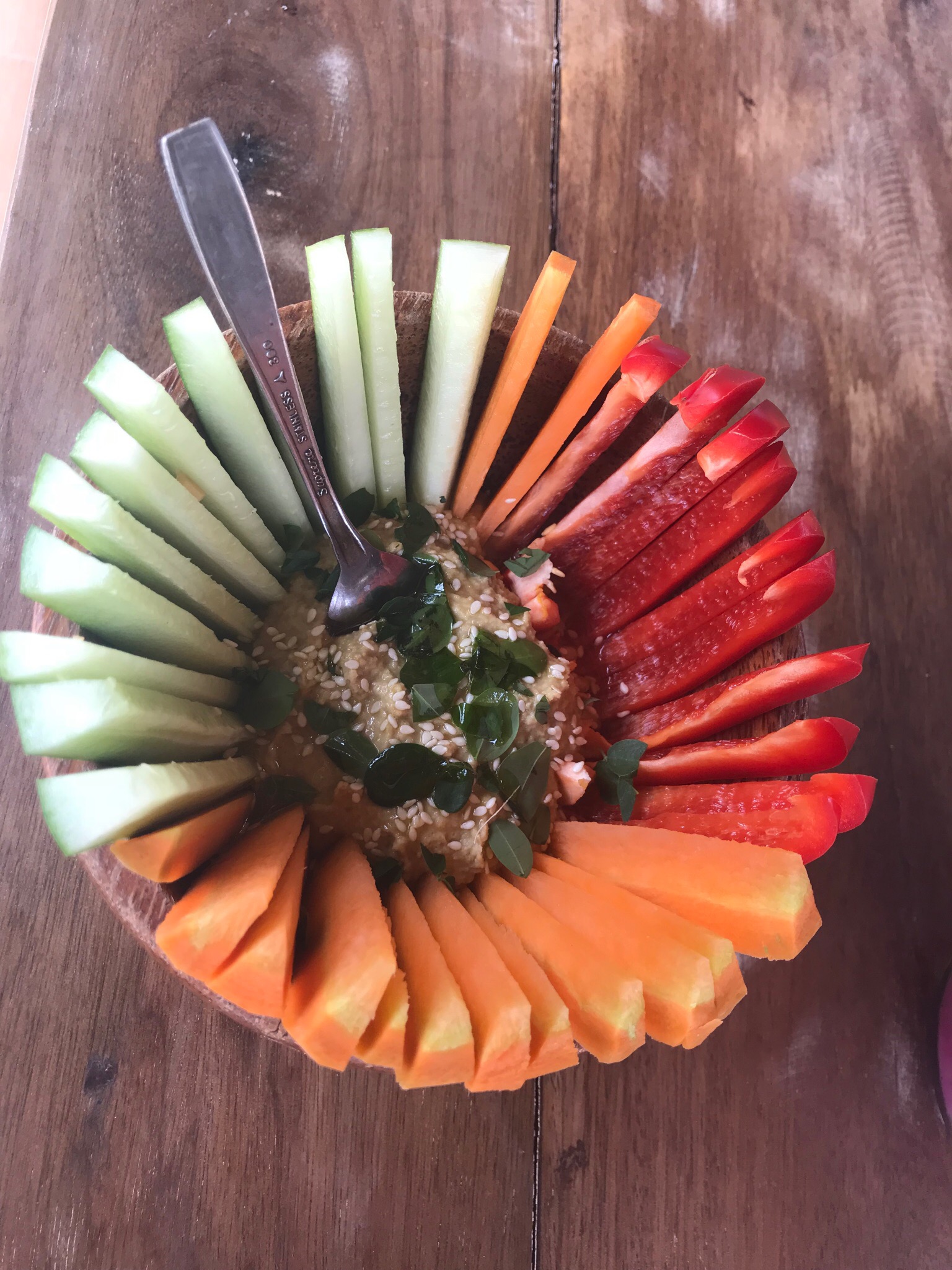 So enough raving about yoga and food for now, one last thought though. The Indonesian yoga world feels like an inclusive healthy community for people of all abilities and interests. I’m wondering how to recreate this vibe in my local community? Lots of creative ideas are percolating here in the sun; which one makes it to the top of the list is the ultimate question?!